That’s right, our very own MSW sponsored Broderick Bauguess not only won the 2019 SCCA Runoffs in T3 but also set a new track record in the process! 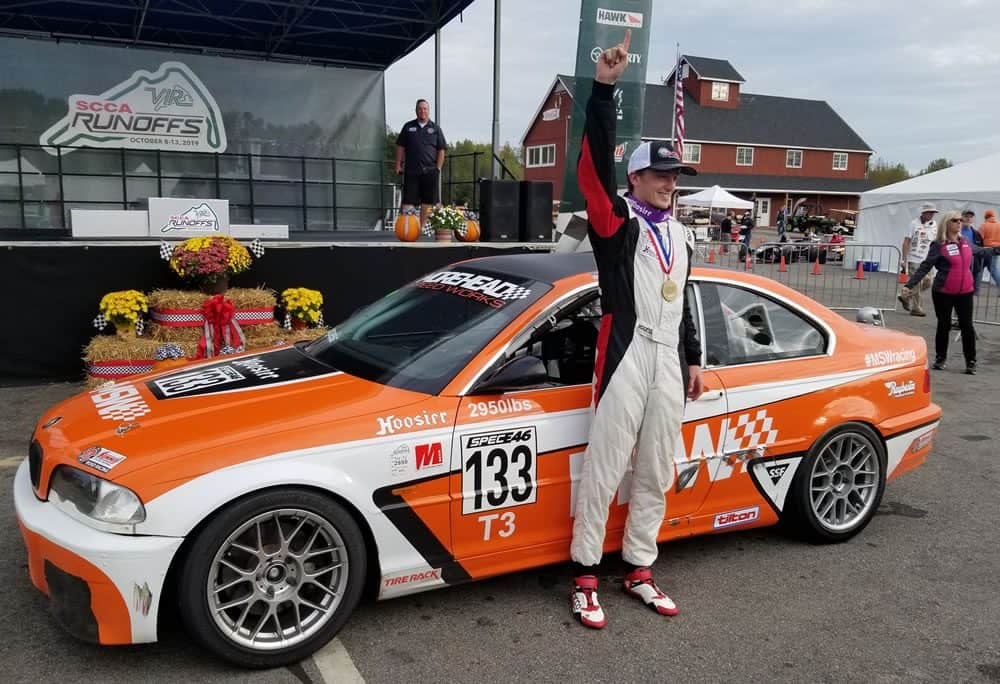 Broderick campaigned the MSW SpecE46 through several SCCA Majors Tour events during 2019, having never finished lower than 2nd.  We were extremely proud to be a part of this journey and were there at VIR for the momentous occasion.  It was all the more special as it all occurred on MSW owner, Chad Morehead’s, birthday.  Now that’s a great birthday present!

The following is from the SCCA’s news release: 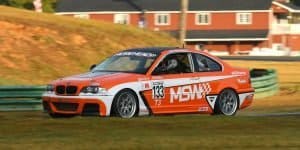 ALTON, Va. (October 12, 2019) – Touring 3 (T3) Runoffs rookie Broderick Bauguess, of Laurinburg, North Carolina, made a daring drafting pass at the top of the Roller Coaster on defending T3 champion Marshall Mast, of Narvon, Pennsylvania, to claim his maiden SCCA® National Championship Runoffs® title Saturday morning at Virginia International Raceway (VIR). After exchanging the lead six different times and starting the race side-by-side through the first five turns with Bauguess, Mast had to settle for a second-place finish, while Jason Ott, of Littleton, Colorado, completed the T3 podium more than 18-seconds behind the leaders in third.

Going flat out for the entire 15-lap, all green T3 season finale, Mast and Bauguess traded point several times throughout the race, forcing each other to be faster lap after lap. Mast, in the No. 31 Phoenix Performance/ Hawk/ Hoosier Ford Mustang GT broke the VIR T3 track record with a time of 2:05.616. But, he was once again outdone by Bauguess, in the No. 133 Morehead Speed Works BMW SpecE46. The first-time Runoffs participant immediately topped Mast’s time, crossing the stripe with a fast-time and new track record of 2:05.354-seconds.

“We set out this year with a goal. We were able to achieve that goal and I am absolutely elated,” said Bauguess. “We are just a father-son team and I think that’s my favorite part, being able to share this moment with my dad. That’s why I had to pick him up to take the victory lap with me. It was special for both of us and I wouldn’t be up here without him.”

Mast had the fight of his life at the 2018 SCCA® National Championship Runoffs® at Sonoma in the T3 class, and on Saturday at VIR Mast experienced Sonoma déjà vu, but this time against Bauguess. However, the end of the race played out a bit differently at VIR than at Sonoma for Mast, with the defending champion missing out on back-to-back titles by just under four tenths of a second. On the final two laps, after losing the advantage for the last time on lap 13, Mast, looking like a Rally Cross driver, skillfully drafted through the corners behind the leader, but in the end, had nothing left for Bauguess’ BMW SpecE46.

“This race was very comparable to the Sonoma race last year, I just didn’t win this time,” laughed Mast. “I held Broderick off for a bit but with the draft here he was able to stay on my bumper pretty much the entire time. My last lap I had to give it all she got to try to pull a Hail Mary, working the car as hard as it would go, but just couldn’t take back first before the checkered.”

Ott, starting in third place in the No. 09 Alpine Auto Sport/ Hoosier BMW Z4 M had a bit of a tussle with Scotty B. White at the green flag, losing position. Ott regained third place after two laps, leaving White in his mirrors. The battle with White cost Ott valuable time to contend for the lead. While Ott was matching the pace of the leaders, he was unable to mend the gap that Mast and Bauguess built.

“Unfortunately, I was by myself watching Marshall and Broderick fight in the distance for most of the race,” said Ott. “They were setting such a blistering pace. I was setting relatively the same lap times, but I just wasn’t able to close the gap. I was driving as hard as I could, and third is where I ended up.”

Tomas Ballester of San Juan, Puerto Rico earned the Sunoco Hard Charger, improving seven positions from 16th on the grid to finish in the top-10 in ninth.

Live, online video coverage of Runoffs races, presented by Mazda, is available throughout the three days of competition at SCCA.com/live. An audio race call, supplied by the Super Tour Radio presented by Hoosier Racing Tire broadcast team, is also available at www.SCCA.com/live, as well as live timing and scoring for each National Championship race.