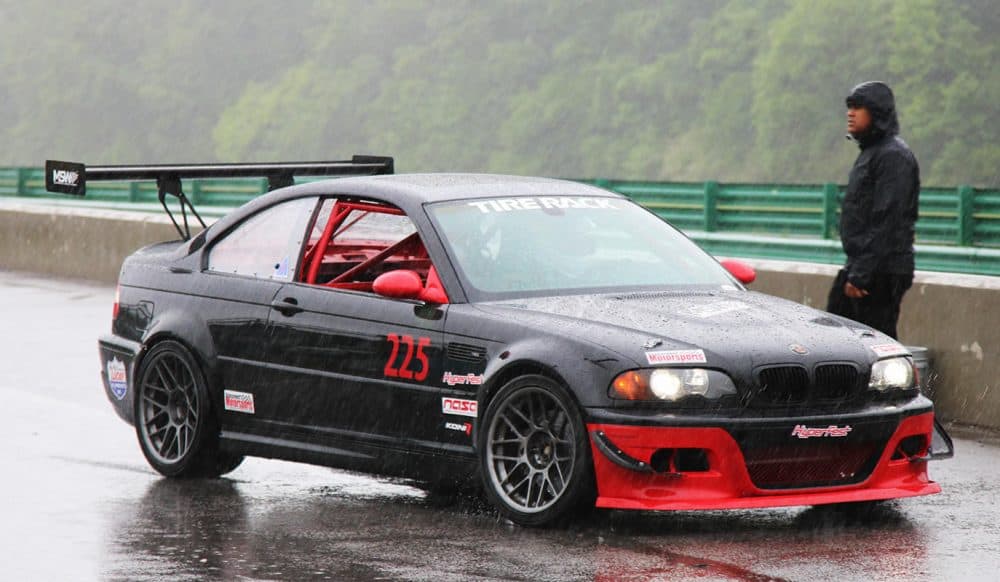 MSW sponsored driver Broderick Baugess competed in the annual Grassroots Motorsports Ultimate Track Car (UTC) Challenge at Virginia International Raceway.  He finished with an absolutely amazing third place overall and netting the fastest lap of any BMW.  All this against some very stiff competition.

The E46M3 featured very little in the way of modifications, outside of an MSW Club Racing wing, MCS suspension, and our secret sauce chassis setup.

The following is from Grassroots Motorsports article covering the event.

The weather played a huge part in the results as rain fell during every single session. These conditions ultimately rewarded those who could best adapt to the changing conditions.

After a full day of thrills and spills, a victor emerged: Franklin Futrelle and the Élan Motorsports Technologies team took the overall win in their Élan NP01 with a 2:01.083 lap time. It lapped Virginia International Raceway roughly four seconds faster than the second-place finisher, Dan Raver and his Superlite SL-C.

Élan Motorsports Technologies developed the Élan NP01 for a spec road racing class hosted by the National Auto Sport Association. We drove the car after the event–look for a full report in a future issue–and the mechanical grip offered by the chassis can only be described as astounding. (This one, though, was modified a little beyond the NASA spec regs.)

Broderick Bauguess came to the event with a mostly stock 2003 BMW M3–the only big changes involved aero and suspension upgrades. The car didn’t feature any major engine modifications and even still used the stock brakes, but Bauguess was able to pedal the car all the way to third place overall. Bauguess, now 21 years old, has been racing cars since he was 14.

Also impressive: Our Fastest Front-Wheel Drive award didn’t go to one of the popular hot-hatches often seen at the track. A 400-horsepower Scion xA driven by Justin Crenshaw barely edged out Brian Tyson’s Ford Focus ST for top honors with a 2:25.199 lap time.

The pre-event favorite for that award was Will Au-Yeung and his 800-horsepower Honda Civic. The week before the UTCC, he set the record for the fastest front-wheel-drive lap at Road Atlanta. However, during his first warm-up lap at the UTCC, an oil line fitting failed and the car caught on fire. Thanks to Au-Yeung’s quick reactions, however, the fire was extinguished and damage was kept to a minimum. However, he and his crew wouldn’t be able to repair the car in time.

The Ultimate Track Car Challenge is an annual competition held by Grassroots Motorsports for the sole purpose of finding America’s fastest track cars. Anyone can enter with any type of car, and there are no restrictions on vehicle preparation. The event has been hosted at VIR for the last 12 years.

Full event coverage will be featured in the October issue of Grassroots Motorsports, including a complete rundown of the entire pack of contenders. You can get your subscription for just $10
right here.

Virginia International Raceway is hidden away in the hills of Alton, Virginia, straddling the border of Virginia and North Carolina. Since its reopening in 1998, VIR has grown to be one of the finest tracks in the nation. The beautiful 17-turn, 3.27-mile course offers complicated curves and elevation changes for the ultimate driving experience.

We’d like to give a big shoutout to our partners who helped make this whole event possible: Tire Rack, Koni, Lucas Oil, BimmerWorld, Mach V Motorsports, AMT Motorsport, SPA Technique, Ford and NASA Mid-Atlantic. Please help us thank them for supporting our community by considering their products for your project.

The Mid-Atlantic Region of the National Auto Sport Association, run by Chris Cobetto, sanctions the event. NASA has been the market leader for amateur road racing in the region for many years.